I’m typing this up with Luna curled up and purring next to me, and Sunny supervising from the windowsill overhead. It was love at first sight when Kevin and I adopted Sunny and Luna in May 2019. We met them in the shelter as one rambunctious kitten climbing into our laps (Sunny), and one sweet but shy kitten welcoming our petting from her snug blanket nest (Luna). They’ve grown much larger and fluffier now, but they’ll always be kittens in our hearts! They’ve brought us tons of joy and entertainment through COVID lockdown and social distancing. Much thanks and love to Quincy Animal Shelter and its volunteers for bringing them into our lives! 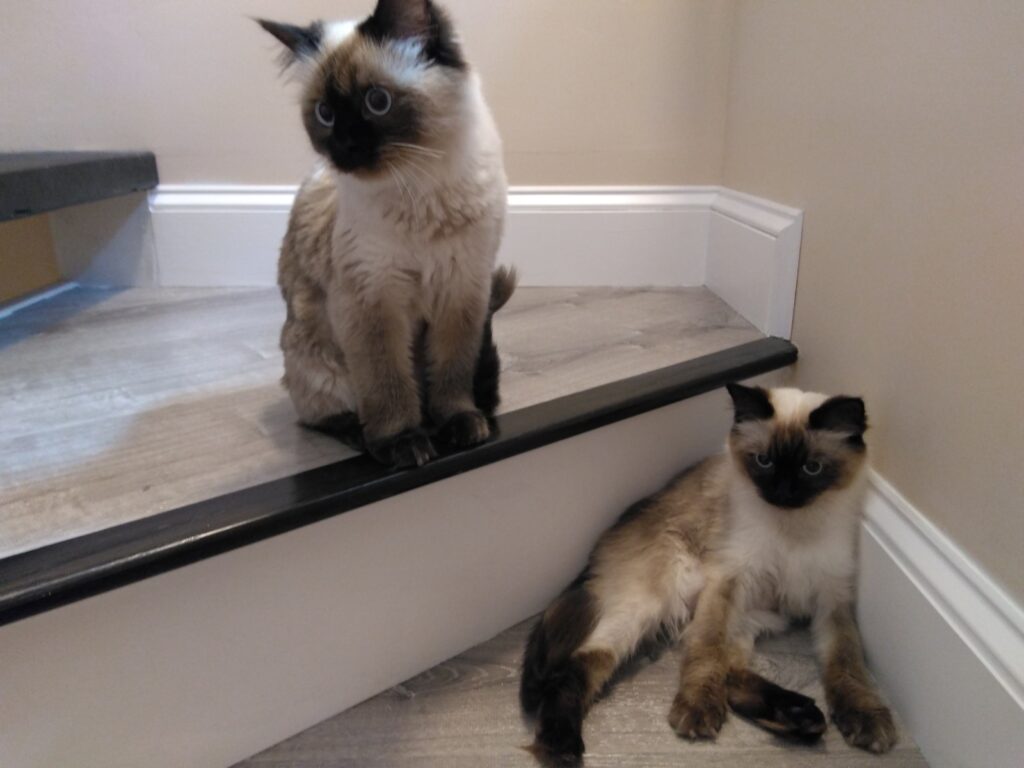 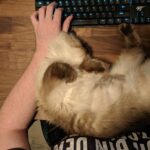 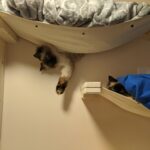 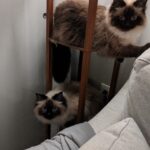 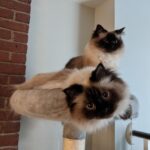 Riley rescued me 15 years ago on July 6th. He was 12 weeks old. He is an amazingly special animal and we are forever grateful that you brought us together. I had come in to see another kitten and Riley was spoken for. But, he decided I needed him and he leaped into my lap. He has been there for 15 years. We have an indescribable bond. Every day with him is a blessing. Thank you for everything that you do! 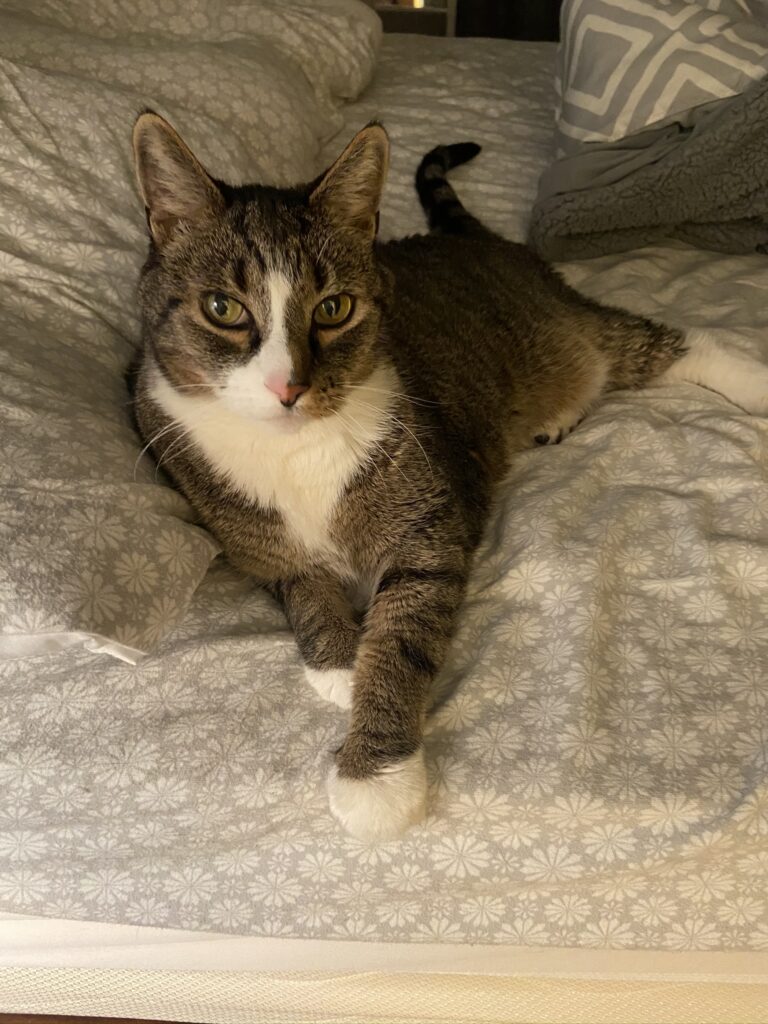 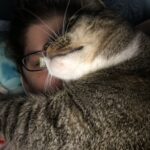 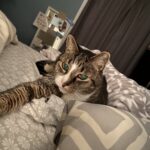 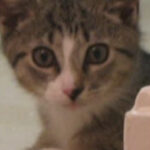 In April of 2019 a 14 yr.old male Shi Tzu came into QAS after the owner became homeless. Buttons could only walk a few feet before his back legs gave out and often he was unable to get up. Sadly, this meant he was sometimes left to sit in his own excrement until someone came to his rescue.

He had never been neutered, needed dental care and looked like a train wreck! That being said, Buttons was alert and happy and didn’t seem ready to “give up”.

We had him examined by our friends at Canton Veterinary Hospital and did labwork to determine any underlying conditions.  The next day, Dr. Kristin Scott DVM told me “the only thing wrong with this dog is he’s old!”

We had Buttons spend a week at Canton while QAS was being cleaned; giving the Veterinary Technicians time to fall in love with the little guy!

When he returned to us, he was sporting “wheels” which Canton Veterinary donated to us. It became obvious that regardless of what Buttons looked like, he was far from done living his life! His owner came to visit and cried when he saw Buttons with the wheels.  He understood that he was unable to care for him at this level and agreed to sign him over to QAS.

Meanwhile, the staff at Canton was missing the little guy!  Dr. Scott explained that the Vet Techs had come up with an “adoption plan” for Buttons; one they hoped QAS would agree to. Buttons would be adopted by Canton Veterinary Hospital.  He would live there and be cared for by the staff.  The techs agreed to take turns bringing him out for adventures hoping to extend his quality of life to a new level!

While unconventional in nature, their plan seemed perfect for Buttons!  We waived the adoption fee as they would assume all responsibility for his medical and daily care.

Buttons has his own kennel in the treatment area for overnight sleeping or temporary restriction to keep him safe.  He has 3 different beds around the area; his favorite is probably his tepee, a Christmas gift from one of the technicians.

On the occasion that he has an “accident”, he is scooped up by one of the techs, bathed, dried with a hair dryer and put back in action.  I think he may be the nosiest dog I have ever known! The mental and physical stimulation he receives from everyone combined is just what he needed. Since moving to Canton, Buttons has been on hikes, to a brewery, to a home for a “doggy birthday party”, home for Thanksgiving: this list goes on and on! These vet techs have totally honored their commitment to extending Buttons quality of life, and he has become friends with their personal pets.

Should you stop by Canton Veterinary Hospital, you are likely to see Buttons zooming around the reception area greeting everyone! 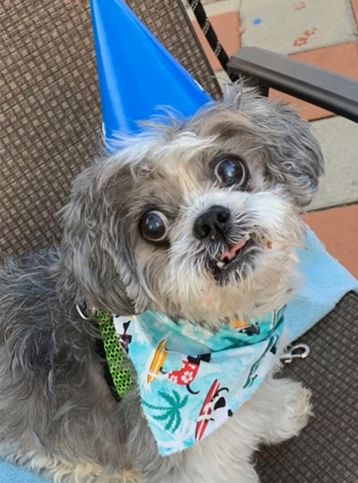 Fourteen years ago a mommy cat and her 3 kittens arrived at QAS. The kittens all had a neurological condition called cerebellar hypoplasia,which affects movement. We had  3 cats at the time but couldn’t resist bringing baby Alana home. She was renamed Lexie and doesn’t let her CH stop her from doing anything she wants. Lexie is now a senior but is just as sassy as ever! 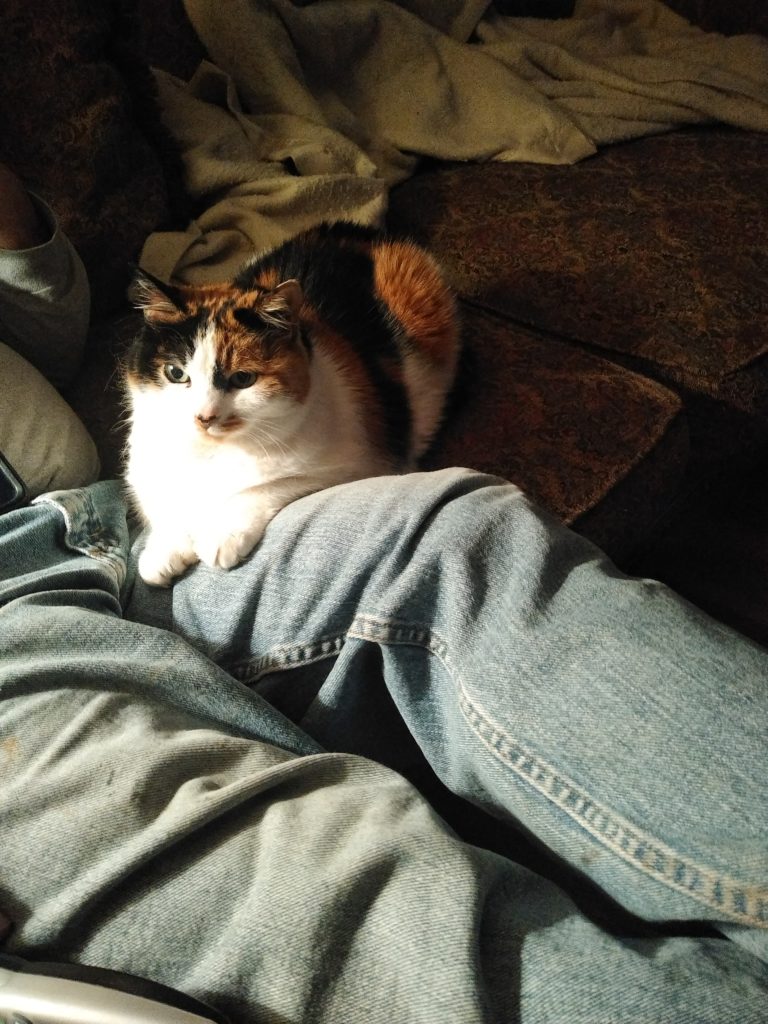 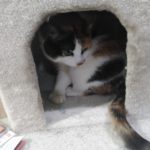 My husband and I adopted Harmony and Melody from QAS in 2016 and 2017. They are the love of our lives. 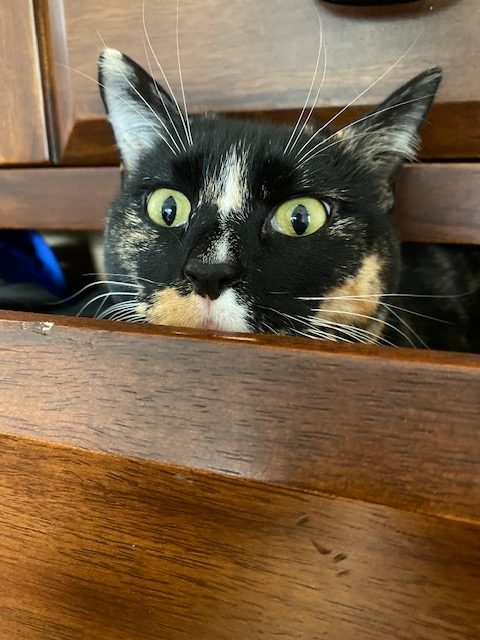 We have had Blue for about a year now. He is absolutely lovely. Friendly to all. Not a barker. Doesn’t wreck things, he’s snuggly. I can’t imagine an easier pup. His only bad thing, he cannot stay out of any body of water. We love him.

My goodness, I can’t believe I’m sitting down to write this. In 2008, I had just moved out of the house I was living in, and I had a 5 month old kitten who was used to having other cats to play with. Sadly, those other cats stayed with my former roommates, and she was terribly lonely. So, I went to QAS in search of a companion for her. And that was when I first saw this adorable gray tabby, just chilling with about 4 other cats, totally unphased by anything around her. The shelter had dubbed her “Marina,” since she was found wandering around Marina Bay right after a December blizzard in 2007. I fell in love with her right on the spot. I adopted her, and named her Athena.

When I got her home, she wanted nothing to do with people, but she ADORED my kitten, Izzy. Izzy gave her the grand tour of the apartment, showing her where the food and litter box were, and the two were inseparable. It took two full years for Athena to be ok with people, but I never gave up on her, and Izzy just loved her so much. But that’s all ancient history now. At the ripe old age of 12 (Izzy is now 10), the two are just as inseparable as they were back then… only now, I’m part of the trio. Athena has turned into a regular little cuddle-bug, and you’d find all three of us parked on the couch on any given night. She’s an old girl now, with a touch of arthritis in her hips, and she insists on being carried to meals, but she’s loved, and has been since the day her adoption was finalized. She’s had a good, long life, full of love, snuggles, and treats. I’m so grateful to QAS for bringing her into my little family; I can’t imagine life without her. 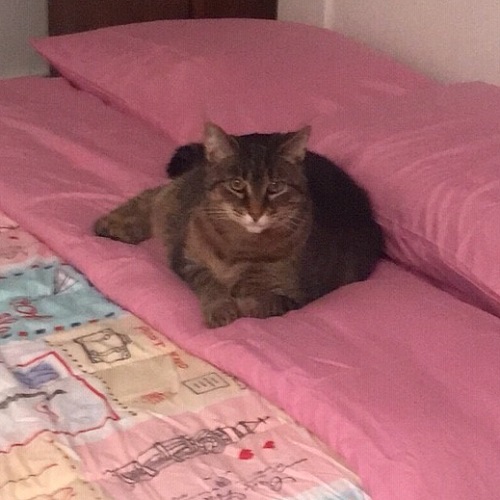 We adopted Simba in April 2018 and can’t imagine our lives without him! He brings us so much joy. Whether it’s playing with his toys, zooming around the house, or simply lounging in various silly positions, he keeps us laughing. Thank you for allowing us to give him his forever home! 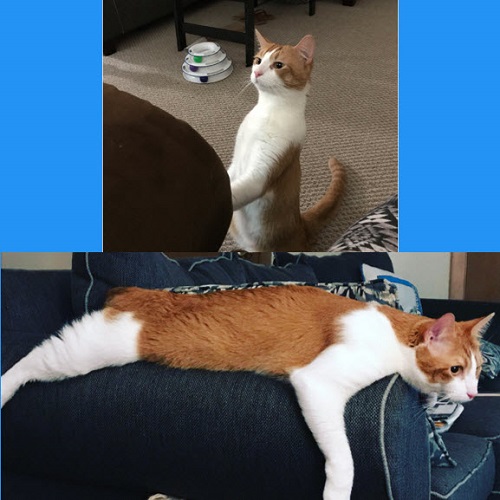 We adopted Monty (formerly known as Almond) back in October 2013. As soon as my husband and I saw her at the shelter, we fell in love and applied for her right away. I knew then and there that this was the cat for us. I had never had a pet before, and so I was very excited. We adopted her at 5 months – she was still a kitten at the time, but she’s grown since then.  Monty has quite the personality, and loves to watch birds from our living room. She’s also very vocal, eats and drinks well, and is just a happy go lucky kitty cat. My favorite time of day is when I come home. She stretches out before me, scratches on her scratching post, and then rolls over at my feet so I can pick her up and pet her. Josh and I love her, and completes our little family. Should we decide to adopt again, we will most likely come back here! 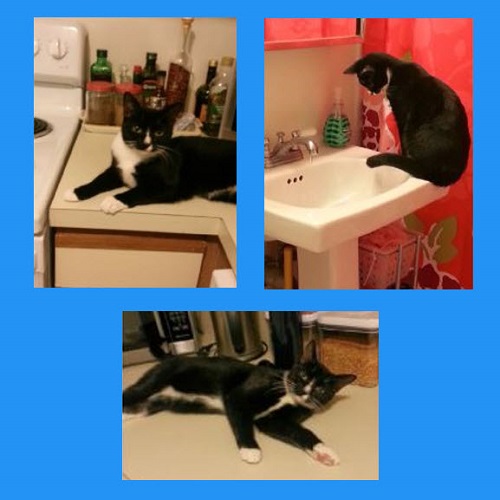 Jerry’s lap is not big enough. Yoda is still a little skittish but loves to sit or stretch out on Jerry. Snowflake sits on whoever’s lap is available. They both love being brushed and have found favorite places to sleep. We’re enjoying them every day. 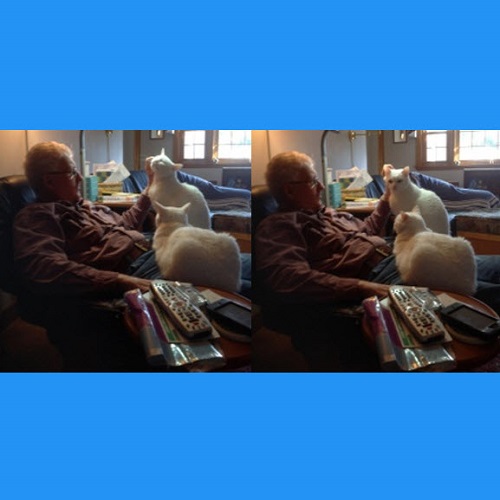